If you own a pressure washer, then you already know how time-saving, water-efficient, and let’s face it, fun they are to use on outdoor cleaning tasks.

What you might be wondering, though, is whether you could use your pressure washer to remove rust on metal equipment and get it back to the shiny condition in which you bought it.

A pressure washer with very high pressure (typically between 2000 – 4000 psi) can be used to clean and strip rust and other sources of corrosion off metal surfaces. The same method can also be used to strip paint away as well. Using a narrow spray angle will often give the best results when using this method.

Consider one of our recommendations of petrol pressure washer 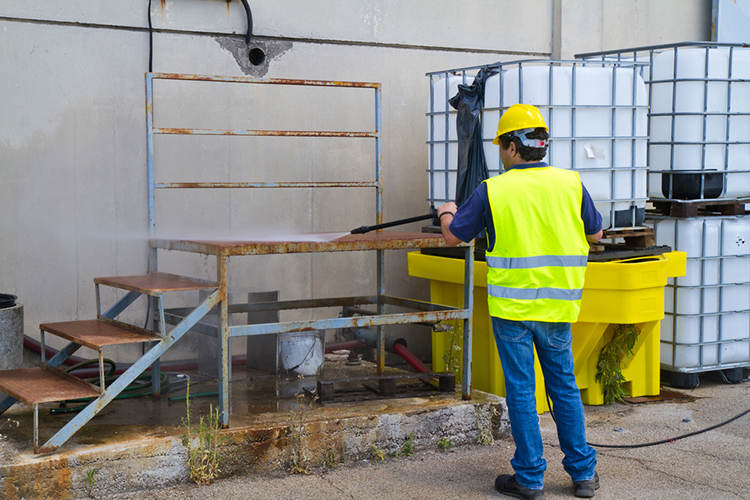 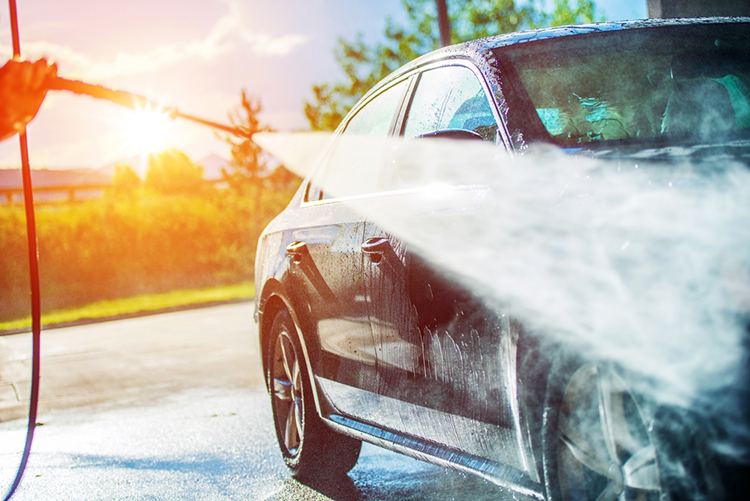 Rust is a common problem when using basically any metal-based appliance. If you live in a country with high humidity and lots of rainfall each year, then chances are you’ve experienced the unsightly reddish-brown corrosion appearing on your equipment.

You may want to remove the rust purely for aesthetic reasons, as it’s definitely not nice to look at. However, rust can actually cause serious lasting damage to metal products if not taken care of.

Rust is a product of oxidation over time, with water being the key culprit (if you live by the sea, or own a boat, you will definitely have dealt with rust, as salt water is even worse). Any time water is left in contact with a metal surface for a prolonged period, the risk of rusting is increased.

This corrosion eats through the metal, causing a layer of brown, flaky material on the surface. This flaky coating is prone to being brushed away, exposing new metal to the elements, and the process repeats. If this was allowed to go on long enough, you’d have no metal left!

Rust can very easily reduce the lifespan of metal gear as well as pose a variety of safety hazards. Moreover, the effectiveness of the equipment will be hampered by the rust, making jobs that were once simple now more time-consuming and frustrating, or even leading to the appliance completely failing on use.

To avoid all this, it’s best to treat and remove rust early on before it becomes a serious problem.

What psi and nozzles do you need to pressure wash rust away?

If you saw my article about pressure washers and car paint, then you know that there are a number of nozzle types and a wide range of pressures available to consider when using pressure washers.

That piece was about avoiding paint removal, so focused a lot on lower pressure water pressures. Since the goal here is to remove rust (and sometimes paint if you want to replace it or upgrade the protective coating), much higher pressures can be used.

In general, a medium to higher-end pressure washer will be needed, as the lower end washers are only capable of getting to about 2000 psi.

Anything above 2000 psi will be sufficient to start removing rust, though depending on how far along the rusting process is, higher pressures may be needed. Some professional cleaning services use up to 6500 psi for their deep cleans.

For home use, though, something that can get up to about 2800 – 3200 psi will do most jobs effectively. It is always best practice to spray a small area of the surface you intend to clean to see if any damage is caused by the washer before carrying on with the whole job.

The nozzles used for this method will tend to be on the narrower end of the spectrum. For particularly stubborn rust build-ups, a laser nozzle that sprays a thin, high-pressure jet (so no fan angle) can be used.

For cleaning a large metal surface (such as shed wall or roof, or gutters), a wider fan spray can be used (something around 25 degrees will work), so as to avoid causing damage to the metal itself.

This fan spray will be the most used nozzle when cleaning metal, both to avoid damage and to speed up the cleaning time with large sheet metal pieces, with occasional switching to the laser nozzle for tough stain removal.

As you probably have seen, it is not just metal that needs to be cleaned of rust every so often. Wherever metal meets concrete, or if metal happens to be above concrete (such as a metal staircase above a concrete driveway), there will often be rust stains seeping across the concrete surface, which can look pretty bad.

For a concrete driveway, which tends to be very durable, a fan spray with a narrower angle (closer to 15 degrees) can be used as this will provide a combination of good coverage and high pressure. The laser nozzle is best avoided here, as chips of concrete could be etched away and fly up, causing a potential hazard.

These cleaning methods can also be used to strip paint away from metal surfaces if you fancy changing the colour. Much the same nozzles and pressures will be employed as anything that strips rust will also strip paint. It is often good to combine these tasks as cleaning rust away will prime the surface for a new coat of paint.

Sometimes, the removal of paint will require some chemical aid. Simple detergents may not be strong enough to strip paint (or rust) away. In these cases, using a dilute mixture of some simple acids (hydrochloric or acetic) can really make a difference.

How to prevent further rust build-up in the future

So you’ve followed all these tips and now you have a shiny “as-new” piece of metal. But now you’re left wondering how long it will be before you have to do it all again. There are some methods you can use to prevent rust from building up and save you time and money in the future.

Before doing any coatings, thoroughly check whether all the rust has truly been removed, as rust that is left underneath paint coats will be allowed to run wild. Also, make sure the surface is dry! Applying primer over some water will just trap the water against the metal, allowing rust to build up again.

Once you’ve removed all rust, the first step is to apply a coat of primer. If you’re treating a piece of equipment that is often exposed to water, then two coats may be useful.

Taking a sealant to a concrete surface can prevent future rust staining as well.

Once the surface is primed, a coat of rust-inhibiting paint will work wonders in protecting the surface. There are a range of these paints to choose from.

For some extra protection, a clear top-coat could also then be applied, however, this wouldn’t be great for something like patio furniture, as the clear coat will make these slippery!

All of these steps will mean that your newly clean surface will remain rust-free for longer.

Using a pressure washer can be a very effective and time-saving way to remove rust. Other methods involve taking a wire-brush or scourer and going over every inch of the surface by hand, which is just not an option for larger surfaces.

If you have a decent pressure washer that can achieve these pressures, then you’ll be able to clean your surfaces and have them gleaming with much less effort than by hand.

This website uses cookies to improve your experience while you navigate through the website. Out of these, the cookies that are categorized as necessary are stored on your browser as they are essential for the working of basic functionalities of the website. We also use third-party cookies that help us analyze and understand how you use this website. These cookies will be stored in your browser only with your consent. You also have the option to opt-out of these cookies. But opting out of some of these cookies may affect your browsing experience.
Necessary Always Enabled
Necessary cookies are absolutely essential for the website to function properly. This category only includes cookies that ensures basic functionalities and security features of the website. These cookies do not store any personal information.
Non-necessary
Any cookies that may not be particularly necessary for the website to function and is used specifically to collect user personal data via analytics, ads, other embedded contents are termed as non-necessary cookies. It is mandatory to procure user consent prior to running these cookies on your website.
SAVE & ACCEPT