If you’ve been keeping up with my other pieces on pressure washers, then you’ll have seen me mention a lot of different nozzles that can be available for pressure washers.

It can be tricky to know what nozzles to use when and what the advantages and disadvantages of different nozzles are. Nozzles will affect the pressure output of the washer as well as the spread of water that you will be able to spray. Knowing which nozzle to use for which job can end up saving you a lot of time cleaning as well as help you avoid damaging your surfaces.

This guide will go through a lot of the different nozzles that you’re likely to come across and help you decide which ones to use to maximise your cleaning efficiency! 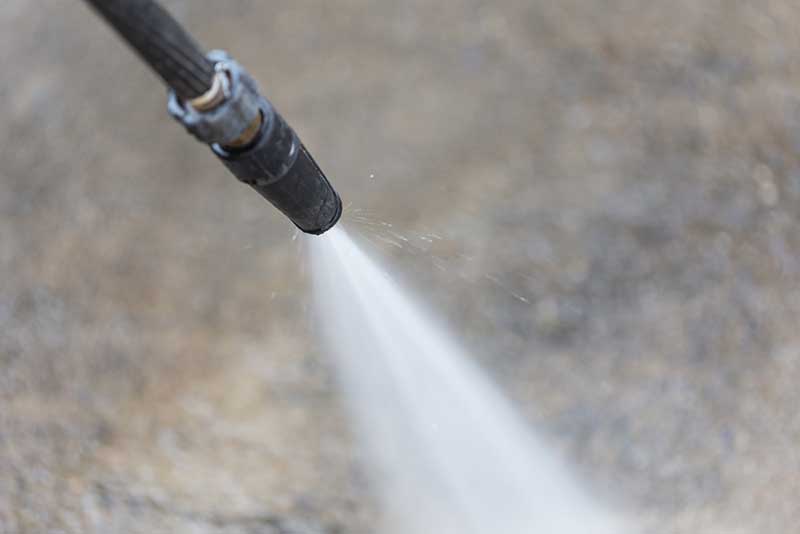 There are a number of different nozzles that have a wider spray angle. These are usually great for large coverage because of the fan of water they make.

Because of the wider angle used, they don’t get to the higher end of pressure output and generally won’t reach the maximum rated pressure that your washer advertises (and you may damage your washer by trying to go too hard on the pressure with one of these nozzles attached).

These nozzles range from 25 degrees to about 65 degrees (this will depend on your washer). They’re also colour-coded for easy recognition and the colours even carry across different brands.

The widest nozzle you’ll come across is the black tipped nozzle at 65 degrees. This is a perfect nozzle for soaping the surface you want to wash before the cleaning starts. As well as having a large spray angle, it has a larger water outlet, allowing you to get enough pressure to pull your detergent into the washer line.

There is also a 40 degree nozzle (white tip) which can potentially be good for fragile surfaces. Since it’s a bit narrower than the black tip, you can get a little bit more pressure out of it, enough to get a proper spray going, but not enough to do any damage to more flimsy objects. This would even work well on window cleaning, and if you’re worried about damage still, you could always stand further back to reduce the force of the water on the glass.

The narrowest of these wide spray nozzles is the 25 degree green tip. This is the most commonly used nozzle and probably the one you’ll end up using the most.

Its combination of higher pressure (from the narrower angle) and reasonable spread makes it the perfect all-purpose nozzle.

This nozzle can be used on virtually any surface that you might be likely to have around your home (driveways, patios) and it can make the job quite quick as well due to the large surface area it can cover.

That covers the wider angle nozzles, as you can see these are the best nozzles for just regular cleaning.

There are fewer varieties of high pressure nozzle. You’ll probably only come across two of these nozzles.

The first is the yellow tip nozzle, with an angle of 15 degrees. This has some niche uses.

It’s a bit too powerful for regular cleaning as it could cause damage to some surfaces.

This nozzle is great for paint stripping however (hence its ability to do damage!). If you’re looking to touch up an old paintjob from scratch, this nozzle can strip paint in a reasonably short time.

If you have more stubborn dirt/grim to get rid of that the wider nozzles aren’t touching, this is a good problem solver, as it can remove tougher stains in a small square.

This nozzle is hardly ever used in the home, and for good reason. It has no spread in its spray, focusing all the water in a thin stream.

This means it can reach much higher forces than other nozzles, but it covers such a small area that it’s not really practical for lengthy cleaning.

Moreover, the high force can actually be quite dangerous and cause serious damage on many of the surfaces you might have to clean in your home.

These nozzles usually find their uses in a construction setting, removing rust or really really caked on mud from equipment. Held at a long distance, it can be used to remove stains from concrete, but this is quite sketchy as it could chip the concrete away.

As you can see, for these higher pressure nozzles, the yellow tip will usually be your best bet, and even then you probably won’t find yourself using it all that much if you clean regularly.

It’s generally just easier to stay away from using the red tip nozzle, to avoid damaging surfaces around your home.

There are a couple of other nozzles that are worth mentioning which you can add to your now formidable cleaning arsenal.

The first is the rotary (or turbo) nozzle. This nozzle is a great piece. Remember the laser nozzle with its crazy high pressure output? Well this nozzle combines that force with a 25 degree spray area. As its name might suggest, it also adds a rotating action, which gives a pulsing jet of water.

The fact that it pulses means the pressure won’t get too out of hand and you can actually use this nozzle to get rid of more stubborn stains that the yellow tip won’t manage.

There is also an adjustable nozzle. There’s not a lot to say about this. It simply is an attachment which holds 5 nozzles in 1. You can switch between all the common nozzles without detaching and reattaching. Pretty handy, just make sure you don’t lose track of which nozzle you’re on!

Which Nozzle to Pick?

As I said above, you’ll pretty much be sticking to the green nozzle for all regular cleaning tasks (after having soaped with the black nozzle).

The white nozzle is good for fragile areas, so if you want to clean your windows or your car (especially when it comes to the lights or tires of your car) this nozzle is a good bet.

You’ll only really want to move to the stronger nozzles for stubborn mud and grime, and even rust off metal surfaces. Even then, the laser nozzle is only really worth it if you KNOW that the surface won’t be damaged. Otherwise the risk is too high and you’ll end up doing a lot more harm than good.

Hopefully this guide has made it clearer what each nozzle does and how to pick the right nozzle for the job at hand!

You’ll get a feel for it pretty quickly as to how much force each nozzle gives out and how much the surfaces you have can take. And if you’re stuck, the manufacturer’s guidelines are useful to refer to and will give you an idea of what nozzle to use.

This website uses cookies to improve your experience while you navigate through the website. Out of these, the cookies that are categorized as necessary are stored on your browser as they are essential for the working of basic functionalities of the website. We also use third-party cookies that help us analyze and understand how you use this website. These cookies will be stored in your browser only with your consent. You also have the option to opt-out of these cookies. But opting out of some of these cookies may affect your browsing experience.
Necessary Always Enabled

Any cookies that may not be particularly necessary for the website to function and is used specifically to collect user personal data via analytics, ads, other embedded contents are termed as non-necessary cookies. It is mandatory to procure user consent prior to running these cookies on your website.