We’ve all read the horror stories of sudden, freak washing machine explosions. Equally, we’ve probably all been skeptical about them.

Did they explode just randomly for no reason? Or was it some kind of user error in the way it was loaded or connected that caused it?

As shown by the large number of reports a few years back, washing machines can indeed explode. Experts at the time attributed this to metal items such as coins and keys left in the drum damaging the glass doors, as well as the drum being overfilled.

So just how likely is it for this to happen?

You’ll be pleased to hear that this is not very likely at all. Washing machines are designed with a number of safety mechanisms in place to prevent explosions.

They’re also designed so that if and when these mechanisms actually do fail, they are meant to fail safely, by shutting down the washing machine.

The reality is that explosions do happen occasionally but there are ways to prevent it.

But first, what causes this? 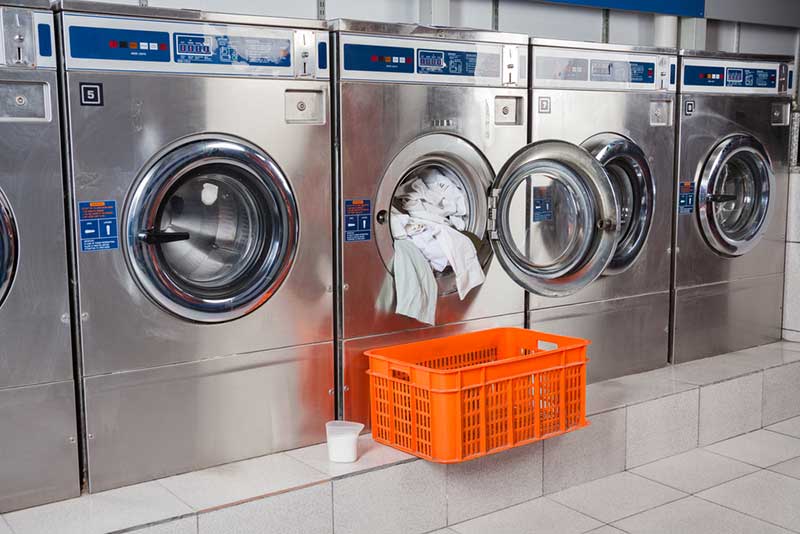 The main cause of these explosions has been that the washing machine has been overloaded.

If the machine is too full, the washer can become very unbalanced, which puts strain on various parts of the machine.

Overloading also means that a higher pressure is placed upon the glass door of the washing machine, causing it to shatter and explode outwards.

Some of the smart, top load washing machines made by Samsung and LG have features designed to detect overloading to prevent this from happening entirely.

Unfortunately, this mechanism was found to sometimes fail to detect overloading.

This would then was the wash tub to beat rapidly against the body of the washing machine, until parts became damaged. Sometimes the tub could break loose while the motor was still running and this would cause what seems like an explosion.

Overloading combined with high spin speeds would cause the highest likelihood of explosion, as this puts a lot of pressure on the drum and can lead to tearing of the drum.

It seems, then, that the best way to prevent your washing machine from exploding is to avoid overloading.

Avoiding overloading, as it turns out, is good general advice anyway, as it can cause other problems for your washing machine.

Other Issues Caused by Overloading

There’s a reason why the instructions to a washing machine will warn against overloading so much.

It will reduce the lifespan of your machine: The first main reason you shouldn’t overload your washing machine is that the weight will often become too much.

Once the laundry is wet, its weight is considerably more than when it went in dry. The machine will be designed to cope with a certain amount of weight in mind.

If this weight is exceeded, a lot of strain can be placed on the components of the machine such as springs, motors etc.

If this kind of strain is applied regularly, these components simply won’t last as long as they’re meant to, meaning potential repairs which can be quite costly, or even a whole new machine years before you planned for one.

Your clothes won’t be as clean: If you overload the machine, you can imagine that the clothes you’re loading in will be packed together really tightly.

This means that the water and detergent mixture won’t be able to get into your clothes properly, leaving some parts unwashed entirely, wasting time and water.

As mentioned before, overloading also causes imbalance in the machine, which also can make it harder for the machine to wash the clothes.

This problem is worse with some of the more modern, smart machines mentioned before.

With the overload detection, these machines will try to achieve a high spin speed. If they detect overloading, they will slow the speed to try and redistribute the clothes.

This will repeat until the balance issue is corrected. If the machine cannot correct this, it will give up and just spin at a low speed for the rest of the cycle.

This will result in longer wash times and clothes that are waterlogged and not as clean as you expected.

Underloading: It can be tempting, because of these issues, to err too far on the side of caution and underload the machine too avoid overloading.

This is a bad idea, as the machine will have balance issues during this time as well, meaning it may not clean your clothes well.

Moreover, it is a bit of a waste of time and water as you won’t be cleaning as much.

The amount of space left in the drum will also leave it liable to thumping, which will become very annoying.

Overloading isn’t the only error that can damage your machine, however.

This is a common cause of washing machine damage, particularly to the glass doors, which are prone to shattering outwards.

Coins or keys left in pockets can chip the doors or the drum, especially when they’re being spun at higher cycle speeds.

This is a bigger problem with cheaper washing machine models. which are made with lower quality parts.

For this it is very important to always check the pockets of the clothes you’re washing before loading them into the washing machine. Some loose change can easily cause serious damage.

The same can be said for belts with metal buckles. These can become like whips at the high spin speeds and really whack the inside of the washing machine.

Remove all belts before loading the machine and you shouldn’t have this problem.

This problem can be mitigated slightly (if you do forget to remove these items), by using a lower spin speed. This will mean that the metal objects are less likely to cause damage and you won’t have to fork out for repairs.

If you’re washing something that has fixed metal parts, like braces or something with a zip, and you’re concerned about them damaging the machine, you can use a laundry bag.

Items placed in the laundry bag will be padded and less likely to cause damage to the machine. It will also muffle any banging or clanging they make, which will be much less annoying for you!

So as you can see, the chances of your washing machine exploding are pretty slim, but not zero.

Overloading is by far the biggest cause of this issue, so if you avoid this and stick to the manufacturer’s recommendations, you’ll be fine.

Avoiding overloading will also help you avoid other issues mentioned in this piece, so all in all a good idea!

This website uses cookies to improve your experience while you navigate through the website. Out of these, the cookies that are categorized as necessary are stored on your browser as they are essential for the working of basic functionalities of the website. We also use third-party cookies that help us analyze and understand how you use this website. These cookies will be stored in your browser only with your consent. You also have the option to opt-out of these cookies. But opting out of some of these cookies may affect your browsing experience.
Necessary Always Enabled
Necessary cookies are absolutely essential for the website to function properly. This category only includes cookies that ensures basic functionalities and security features of the website. These cookies do not store any personal information.
Non-necessary
Any cookies that may not be particularly necessary for the website to function and is used specifically to collect user personal data via analytics, ads, other embedded contents are termed as non-necessary cookies. It is mandatory to procure user consent prior to running these cookies on your website.
SAVE & ACCEPT